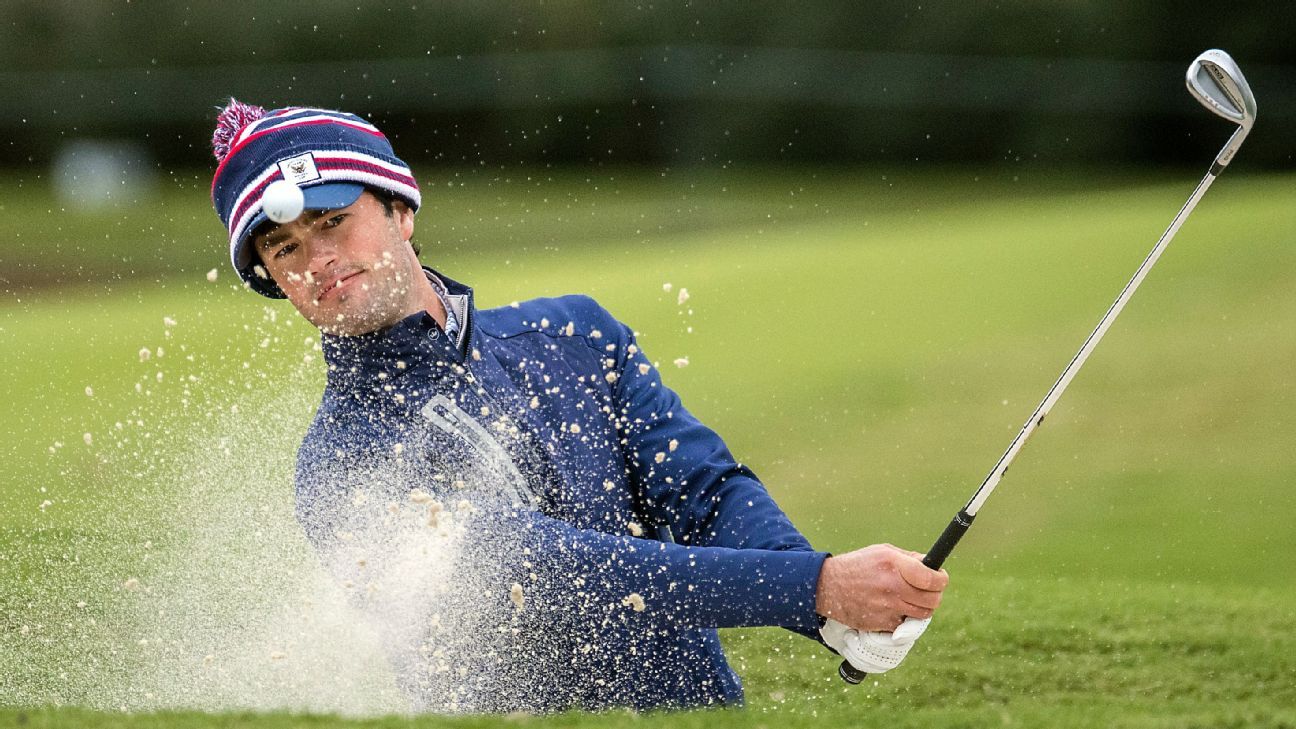 ST. SIMONS ISLAND, Ga. — Cole Hammer would have been happy with pars in the cold and wind off Sea Island. He wound up with more birdies than he imagined Thursday for an 8-under 64 and the low score to par after one round of the RSM Classic.

“It was really cool looking at the top and seeing my last name there,” Hammer said.

Cool applied more literally to the field, with temperatures in the 50s and feeling even colder with the wind off the ocean. This was a day for wool caps, layers of long sleeves and mittens. As usual at this tournament, that didn’t stop the low scoring.

Hammer, who graduated from Texas in May, shared the low score with another Longhorn alum, Beau Hossler, whose 6-under 64 came at the host Seaside course, which played about 2 shots more difficult to par.

“He’s making me look average,” Hossler said when he finished his round and Hammer already was 8 under with three holes to play.

Hammer’s big run ended with a bad swing that sent him into the trees right of the par-5 eighth fairway. He took a penalty drop and wound up with a bogey.

Callum Tarren of England also had a 64 at Seaside, while Ben Griffin had a 7-under 65 on the Plantation course. Griffin had a great chance at winning in Bermuda three weeks ago until a rough back nine. In the final official PGA Tour event of 2022, he might get another.

For Hammer, a good start was just what he needed.

He has been on big stages before, qualifying for the 2015 U.S. Open at Chambers Bay as a 15-year-old. He missed the cut.

He did fine in a few Korn Ferry Tour starts after getting out of Texas. The PGA Tour was another matter, as Hammer found himself trying too hard and getting impatient. The result was six consecutive missed cuts.

He thought he was headed for another in the Houston Open last week, his home tournament, when he opened with a 74.

“I missed my first six in a row. It was a pretty dark period,” Hammer said. “I felt like my game was close enough. I was just putting so much pressure on myself early in the tournament. I did it in Houston again, and then came out with a 65 to make the cut.

“That really spiked my confidence.”

It carried over to the RSM Classic, where Hammer received a sponsor exemption. He only has conditional status on the Korn Ferry Tour, so a good week could go a long way. Otherwise, it’s Monday qualifying or writing for sponsor exemptions.

“Hopefully, my letter-writing skills will transfer over from my communications degree that I just finished up in May,” he said.

For now, he wants to see what he can do over the next three days.

Hossler is another player who first made himself known as a teenager in the U.S. Open. That was 10 years ago at the Olympic Club, where at 17 he was within 4 shots of the lead going into the final round. He shot 76 on the last day, and didn’t even get low amateur. That went to another Texas teenager — Jordan Spieth.

Hossler is now starting his sixth PGA Tour season and still looking for his first win. The closest he came was losing to Ian Poulter in a playoff at the Houston Open as a rookie.

Even more impressive than his 64 at Seaside in the cold and wind was keeping bogeys off his card, four times scrambling for pars.

“It’s a tough course even with no wind and decent temperature,” Hossler said. “To shoot the number I did in these conditions was excellent.”

Webb Simpson had a hole-in-one from 219 yards with a 4-hybrid at Plantation on his way to a 5-under 67. Harris English opened with a 4-under 68 at Plantation, a good start to an important week.

English missed five months because of hip surgery. He is No. 52 in the world, and a big week could help secure top 50 by the end of the year for a Masters invitation.

Jon Rahm wins DP World Tour finale for third time, sends message to critics that 2022 wasn’t a bad year
How Lydia Ko revived her career and returned to LPGA glory
Pros Try and Make a Hole-In-One off a Backboard | Hero Challenge
I COULDN’T hit the golf ball any longer until I DISCOVERED THIS!
Behind the Scenes – Titleist Golf Ball Plant Tour – Casing Layer to Cover