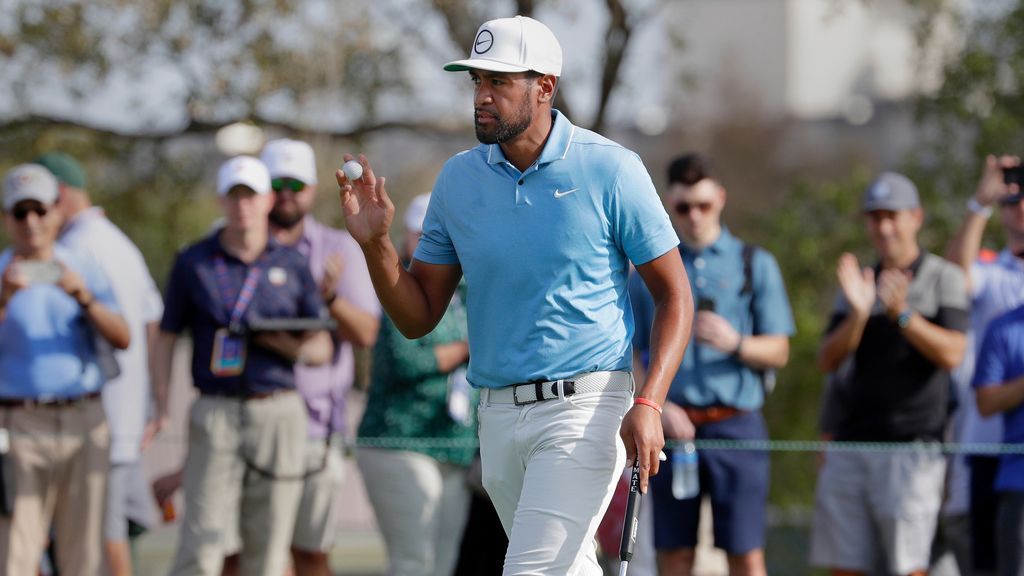 HOUSTON — Tony Finau had his highest score of the week, and it felt as though it was his best in a cold wind Saturday. He kept bogeys off his card, had a 2-under 68 and kept his lead at 4 shots going into the final round of the Houston Open.

Finau had such control at Memorial Park that he hit every fairway and missed only two greens on a day when the average score was 71.2 and only one of the three par-5s played to an average score over par.

Most satisfying was the 10-foot par putt he made on the 18th hole after a rare miss into the bunker. The bogey-free round kept his distance from Ben Taylor of England and allowed Finau to tie the 54-hole tournament record.

“That was a really good round,” Finau said. “I think the score doesn’t say that, but I think I played better than yesterday. You know, yesterday I shot 62. But today that 68 I thought was pretty impressive for the conditions.”

The only change was who was chasing him.

Finau had a 4-shot lead when the second round was completed Saturday morning because of storm delays, leading Patrick Rodgers and Alex Noren. Both had a 73 to fall out of contention.

Taylor delivered a 65, the low score of the third round, including a 20-foot birdie putt on the final hole. “Stealing one there was the highlight of the round,” Taylor said.

The Englishman will be in the final group Sunday with Finau and Justin Rose, who had a 66 and was tied for third — 5 shots behind — with Wyndham Clark (68) and Tyson Alexander (70).

“Listen, it’s all in Tony’s hands,” Rose said. “You can see everybody stacking up behind him — 9 under, 8 under, 7 under, 6 under. If Tony doesn’t have a great day tomorrow, there’s 20 guys that can win the tournament.”

Finau’s confidence has never been higher. He won back-to-back starts this summer in Minnesota and Detroit for the first multiple-win season in his career. He felt like he shook off the rust last week in Mayakoba. He has control of his game.

Rose, however, speaks from experience.

Everyone was giving the HSBC Champions to Dustin Johnson in 2017 in Shanghai. He had a 6-shot lead and was No. 1 in the world. And then he started missing everything, small mistakes were magnified and Rose rallied from 8 shots behind to win.

“If Tony goes ahead and plays well tomorrow, there’s one or two guys that can go out and probably have a great round of golf to sort of ask the question and put some pressure on him,” Rose said.

And the north wind could make everyone feel uncomfortable. Such was the case on Saturday when players struggled on the par-5 16th with its peninsula green. It was the third-easiest hole the opening two rounds with a full field. For the third round and the players doing well enough to make the cut, it was the seventh hardest.

Masters champion Scottie Scheffler took double bogey, which ended his hopes. He was hoping to at least stay close. A double bogey on the 16th and a bogey on the 18th sent him to a 71, leaving him in a tie for 25th and no chance of winning to regain the No. 1 world ranking.