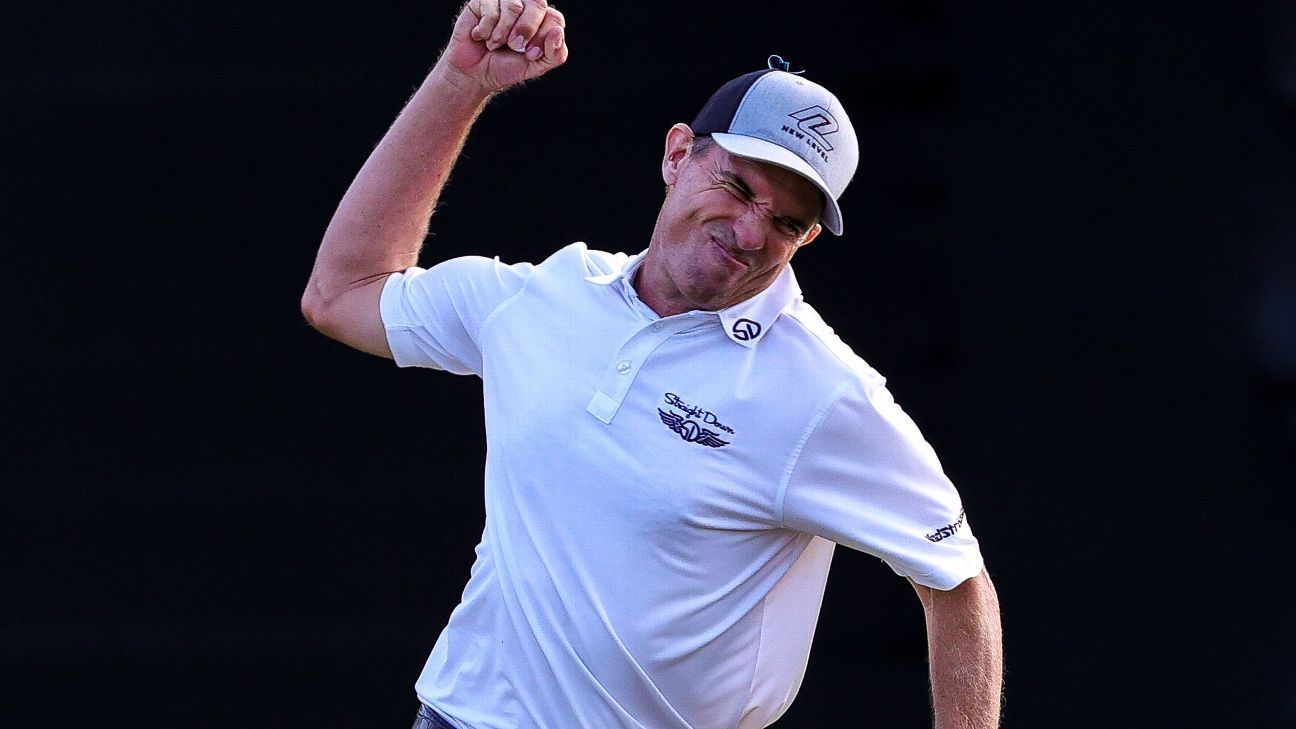 THE WOODLANDS, Texas — Steven Alker returned from a two-hour rain delay by playing a six-hole stretch in 6-under par on the back nine to race past Steve Stricker, close with a 6-under 66 and win the Insperity Invitational on Sunday for his second victory this year on the PGA Tour Champions.

Alker had to make a pair of tough par saves to close out the front nine at The Woodlands and stay 1 shot ahead of Stricker, who was playing for the first time in six months.

Alker birdied three straight holes starting at No. 11, and then he effectively put the tournament away by rolling in an eagle putt on the par-5 15th to build a 4-shot lead.

Stricker and Brandt Jobe each shot 70 and tied for second, 4 shots behind. Alker finished at 18-under 198.

Stricker was hospitalized late last year when his liver count plunged and his white blood cell count spiked. He lost 25 pounds and was worried about his strength and endurance in his first competition since Oct. 10.

“I felt my game got a little bit better every day,” Stricker said.

Alker won the Rapiscan Systems Classic in Mississippi, and he was poised to make it two straight wins until he lost in a playoff outside Dallas by hitting into the water. Now he has two victories, along with two playoff losses.

This win enabled him to move to the top of the Charles Schwab Cup standings with his $345,000 for winning. Not bad for the New Zealand native who only nine months ago had no status at all on the 50-and-older circuit.

He qualified for the Boeing Classic and kept finishing in the top 10 to get into the next week, eventually making it all the way to the season finale.

In 17 starts on the PGA Tour Champions, Alker has 10 finishes in the top five.

“It’s been a fun ride,” Alker said. “I’m just happy to be out here. Everything has come around. I’m enjoying my game. Everything is a lot of fun.”

The rain delay helped in another way. Alker said he was watching TV coverage and noticed his swing was a little off. He returned and tried to stay more on top of the ball, and he was practically flawless the rest of the way.

Jobe moved into second alone with a birdie on the par-3 16th, only to miss a short par putt on the next hole and failing to convert a 12-foot birdie putt on the final hole.

Stricker came away feeling good about his game but uncertain whether he will play next week in Atlanta or take a week off before the first of five majors on the PGA Tour Champions.

“If you would have saw me where I was a month ago to where I am today, that’s what makes me happy because I’ve come a long ways in just a month,” Stricker said. “If I can keep kind of getting stronger and progressing the next month, I’ll be all right.”

It has been a while by Inbee Park’s standards, but the seven-time major champ is lurking at Women’s British
Canada’s Shelly Stouffer wins U.S. Senior Women’s Amateur in the first USGA championship played in Alaska
Zalatoris cuts ties with caddie after second round
Johnson birdies 18th to win APGA Championship
Hit Flush Irons With This EASY Takeaway Tip