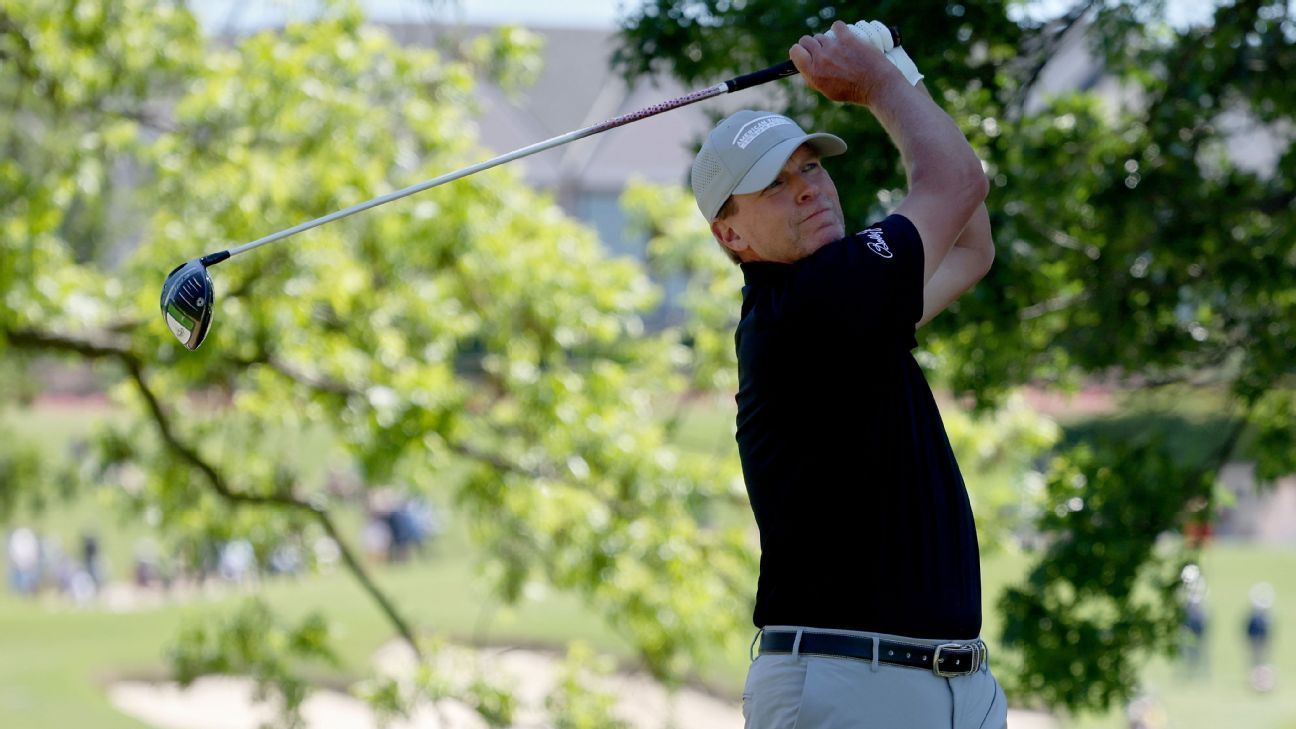 TULSA, Okla. — Steve Stricker took advantage of Mike Weir‘s back-nine collapse Saturday to take the lead into the final round of the Senior PGA Championship.

Stricker shot a 3-under 67 in a stiff north breeze at Southern Hills for a one-stroke lead over Alex Cejka, the senior newcomer who beat Stricker in a playoff this month in the major Regions Tradition in Alabama.

Weir was 8 under through 11 holes, then made a double bogey on 12, starting a stretch of giving back five shots in five holes. The Canadian left-hander finished with a 74, leaving him three strokes behind Stricker, but still in the final group Sunday.

Cejka, a four-time winner on the European Tour, won his only PGA Tour event in 2015 when he captured the Puerto Rico Open. He played his way onto the PGA Tour Champions as a Monday qualifier and was an alternate in Alabama before getting in the field and eventually winning the Tradition. He was second at the Chubb Classic in April.

“He’s been playing great,” Stricker said. “Yeah, I’m going to have my hands full tomorrow. I mean he’s been playing great and I’m going to have to take care of my own self, my own game and hopefully put up a good score. I know the confidence level that he has must be high if he’s right up there again this week. He started as a Monday qualifier and wins a major and he’s in contention again here this week, so it’s a great story. “

Cejka, a native of Czechoslovakia whose family fled the country for West Germany when he was 10, bogeyed his first two holes then made four birdies and no bogeys the rest of the way. He said he has watched numerous players in the past start with a bang on the senior tour after turning 50.

“I’m riding the wave,” he said. “Let’s hope I’ll ride it for a little bit. I’m playing well and I just want to play as long and as good as possible because eventually it’s going to fade off. I mean, that’s normal, you know? But we’ll see what I can do the next whatever, weeks, months, couple years, who knows.”

Stricker, the 2021 Ryder Cup captain who was 2-0 when playing with a 54-hole lead on the senior circuit before losing to Cejka, played a solid round, making five birdies against two bogeys. He hit his approach shot on the 10th hole to tap-in range, then holed out from a bunker on the 485-yard, par-4 16th that played straight back into the wind.

“I stole one there,” Stricker said. “It’s a tough hole and you’re just trying to make a 4 there. . . This is a tough place and it gets your attention on a lot of shots It’s a great test of golf and I feel good about what I did today.”

Weir pushed his tee shot to the left on the par-4 12th behind a tree, punched out, then missed the green right with a short iron and failed to get up and down for the double bogey. He left his third shot short in a bunker on the par-5 13th leading to another bogey, the pushed his tee shot on 15 and wound up missing a par save from 5 feet. His tee shot on 16 found a massive fairway bunker, leading to a layup and another missed par save.

“I was just a little off with my game and this is a tough golf course,” said Weir, the winner in Houston thos month. “It’s a demanding course and it will bite you. And I got bit a little bit today on the back side. I’ll go try to iron a couple things out here and try to get a good attitude, some good rest and get ready for tomorrow.”

Beyond those in the final group, Tim Petrovic and K.J. Choi were five back at 1 under. Petrovic shot 68 and Choi 71. Jerry Kelly (69) and Stephen Leaney (71) were even par.

The USE IT, LOSE IT Challenge (feat. Sophie Stone)
Stricker says Koepka healthy, ‘all-in’ on Ryder Cup
How to unlock EFFORTLESS POWER in your GOLF SWING
Phil Mickelson’s driver from the woods leads to improbable birdie at Fortinet | 2021
CHIP SHOTS Around the Green are MUCH EASIER with this Short Game Technique