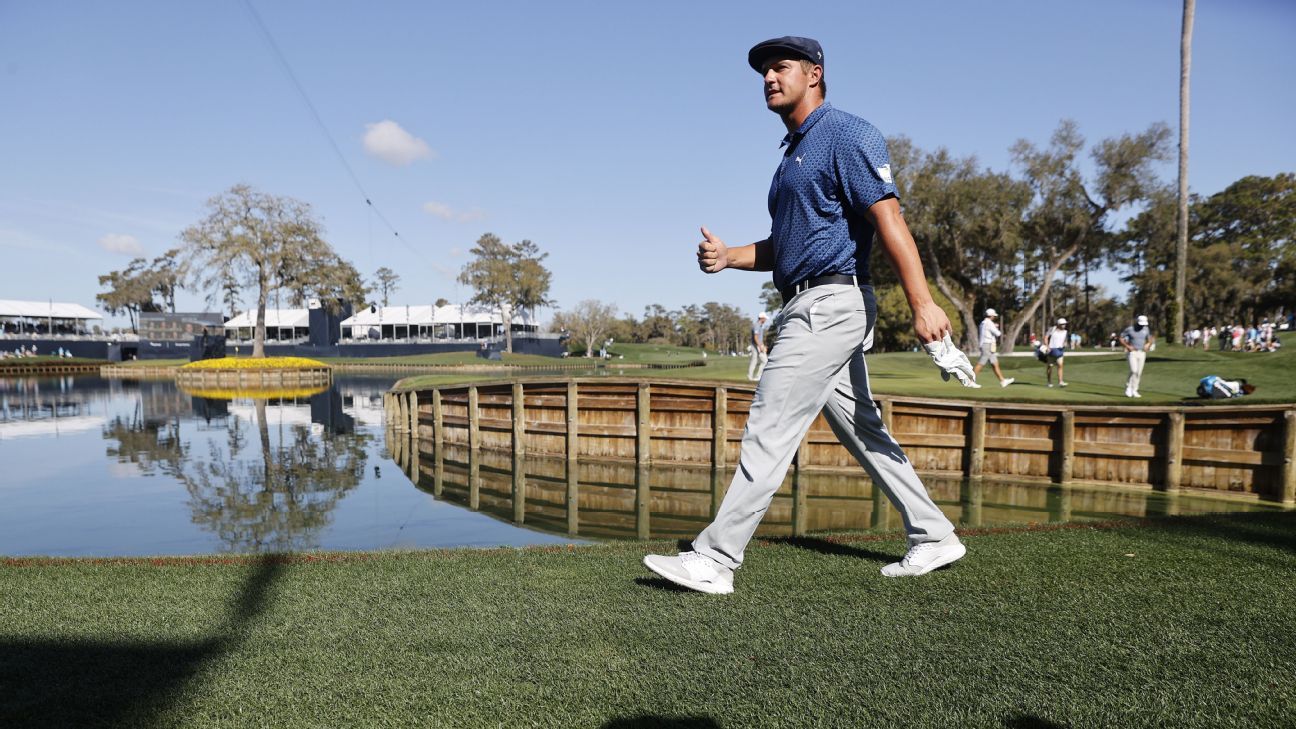 PONTE VEDRA BEACH, Fla. — The Players Championship almost never discriminates. It doesn’t matter if you are young or old, hit it long or short, make everything on the greens or struggle with putting. Anybody can contend.

TPC Sawgrass has long had this reputation. It simply favors no one. And it is playing out that way again through two rounds.

That’s how 47-year-old Lee Westwood and the kid who looks like he just graduated high school — that would be Matthew Fitzpatrick — can both be atop the leaderboard. It’s why short-hitting Brian Harman and long-hitting Bryson DeChambeau can see their names next to one another in a tie for fifth.

And it’s why relative unknown Denny McCarthy can be in contention and four-time major champion — and defending Players champion — Rory McIlroy is headed home for the weekend.

A lot can happen over the final 36 holes, and here are the bigger things to keep your eye on:

He has had a bit of a career resurgence over the past year or so. He won a European Tour event last year in Abu Dhabi before the coronavirus pandemic shutdown and won the European Tour’s Race to Dubai. Last week, he was runner-up to DeChambeau at the Arnold Palmer Invitational. He is now ranked 31st in the world.

On Friday, Westwood made it look easy. He didn’t card a bogey and hit 14 of 18 greens. This came a day after he hit 17 of 18 in Thursday’s opening round. He remains a great ball-striker, but lately Westwood has found some success on the greens. On Friday, he needed just 26 putts on his way to 6-under 66.

“I care less about the outcomes,” said Westwood, who stands at 9 under and leads the 26-year-old Fitzpatrick by a stroke. “I still care about my performance, and that in turn leads me to work as hard as I’ve always worked. But I’ve been working with a psychologist for a few years now. We just focus on the process. We don’t focus on the outcomes and things we can’t control. The only thing I can control when I go out there is the process and making sure I have fun.”

This is Westwood’s first time in the tournament since 2017. He does have five top 10s in this event over his career. And this run comes 10 years after he skipped the event. He was the No. 1-ranked player in the world then, but said he didn’t want to travel from the Untied Kingdom for just one event.

In this edition of America’s Caddie, join Michael Collins at the site of the 2021 PLAYERS Championship, TPC Sawgrass. Explore the course’s iconic features and meet the former Jacksonville Jaguar who has some serious golf chops. Stream now on ESPN+

Despite last week’s win and entering this weekend three off the pace and tied for fifth, DeChambeau said he has not been comfortable with a few aspects of his game. Even if he played flawlessly, DeChambeau would not feel content.

“Never. Because my brain is — I’m a perfectionist, and I’ll continue to be so until the day I die and until the day I stop playing this game,” he said. “That’s just the way I am. I love it about me, that’s what makes me work hard and fight for every shot out there. At the same time, it makes me worry about stuff a lot.”

Sergio’s fight with his putter

Sergio Garcia, who won this event in 2008, loves TPC Sawgrass’ Stadium course. Though he’s tied for third and just two shots back of Westwood, he’d be in an even better spot if not for his putter.

Despite rolling in birdies at the 16th and 18th holes, Garcia had several close misses — including a 22-inch putt on the 15th green. After gaining 3.73 putts on the field in his opening-round 65, Garcia lost 2.9 during the second round. He needed 34 putts on his way to an even-par 72.

“It was a beautiful roller coaster,” Garcia said. “There were a lot of good things. Unfortunately, [there are] a lot of bad things. But more than anything there was a lot of fighting. That’s one of the things that I’m most proud of because when things are not really happening and you miss a couple putts here and there, it’s easy to kind of let the round get away from you.”

The two-shot penalty Viktor Hovland received Thursday for failing to return his ball marker to the proper position ended up costing him. Hovland shot 74 on Friday to finish at 2 over par, missing the cut by two shots.

It turns out it was Hovland’s mother who told him he had failed to return the marker to the proper position. Hovland was cited for a breach of Rule 14.7 when he moved his marker out of the line of Justin Thomas and then failed to return it to the same spot. When he returned the mark, he actually moved it farther away.

“I’ve already kind of put that past me,” he said. “I’m just more disappointed that I wasn’t able to play better.”

Problems at the top

DeChambeau, who is ranked sixth in the world, is the only top-10 player within three strokes of the lead. Dustin Johnson, the No. 1 player, is eight strokes back. Jon Rahm, ranked second, is five back, third-ranked Justin Thomas is seven back and fourth-ranked Colin Morikawa is nine back.

Xander Schauffele (5 over), Patrick Cantlay (2 over), Webb Simpson (2 over) and Tyrrell Hatton (1 over) won’t make the cut. Neither will McIlroy (11 over).

Phil Mickelson had an interesting even-par 72 on Friday — he made six birdies, a triple bogey and three bogeys. With all that, he found his way into the weekend, making the cut for just the second time since 2012.

Adam Scott is changing up more than his caddie to be ready for the 2023 season
LPGA rookie Allisen Corpuz has made a statement on and off the course
JASON DAY – My BEST Driving Tips | ME AND MY GOLF
Do THIS For An Effortless Golf Swing
I COULDN’T hit the golf ball any longer until I DISCOVERED THIS!