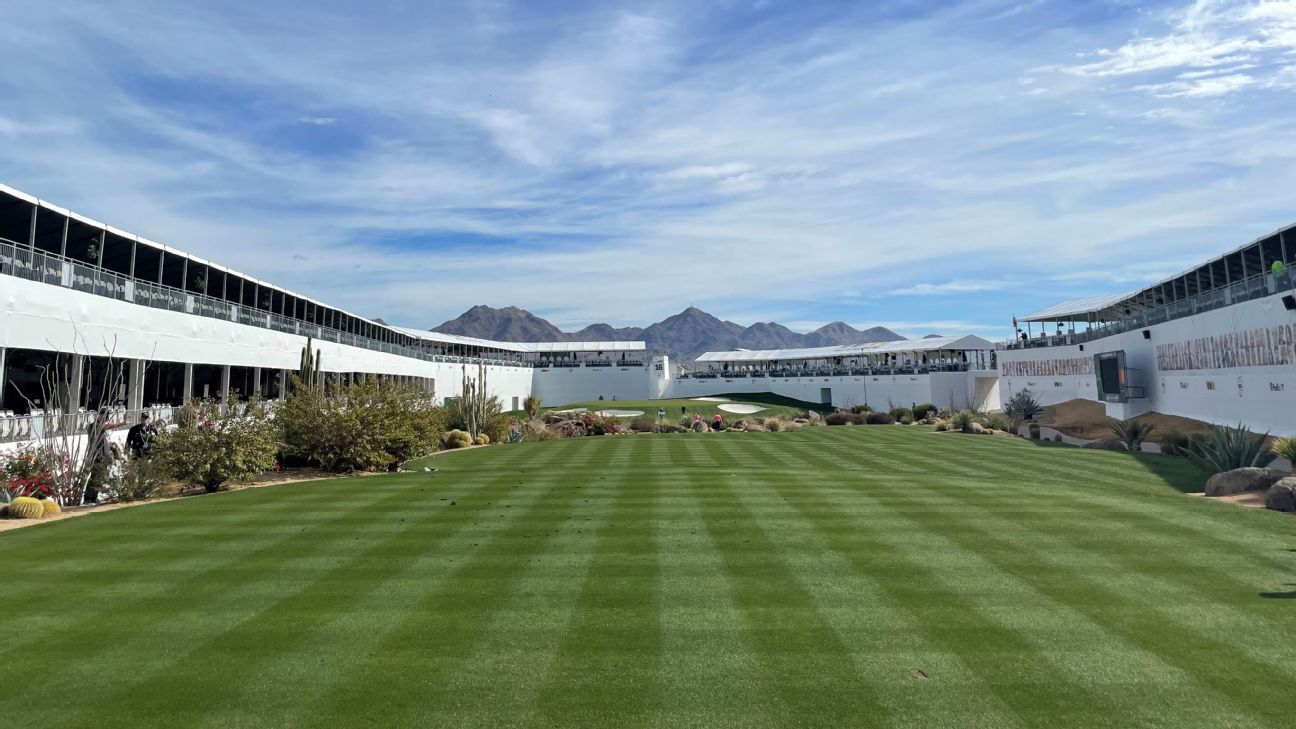 SCOTTSDALE, Ariz. — Before he set foot on the property at TPC Scottsdale, Justin Thomas could see that this year’s Waste Management Phoenix Open was going to be different.

As he pulled in, Thomas had a view of the 18th hole from his car and didn’t see the large structures full of suites lining either sides of the fairway.

And that was just the beginning, thanks to a significant downsizing around the course because of the COVID-19 pandemic.

There aren’t any stands on No. 1, No. 9, No. 10 or No. 17. The only hole that has stands will be the 16th — the legendary par 3 known for its arena setting and party atmosphere. But even the tournament’s signature hole looks different.

It’s a single-level structure instead of three. There aren’t any bleachers — meaning the rowdiness from the fans who show up to the course at 5 a.m. to sprint to get their seats along the fairway and by the green is gone — and the suites are divided into four zones but fans aren’t able to enter other sections besides their own.

Fans, however, were able to pay to have their faces on the façade around the hole. And tournament chairman Scott Jenkins said there will be mandatory masks and no eating or drinking in the first two rows of tip-up seats around the 16th. He expects the daily attendance to be between 4,000 and 4,500 fans, a far cry from the 102,739 daily average in 2018, the last time the tournament announced attendance figures — when a single-day record was set on that Saturday with 216,818 in attendance.

“It is not anywhere near going to be a packed house, just with limitations we have on the number of people in each zone,” Jenkins said. “I think we’re pretty comfortable with our plan.”

The typical suite came with 40 tickets, but Jenkins said the cost analysis of reducing the allotment to 20 — thus reducing the price of the suite — didn’t make it worth building the usual three-tier structure that could house more than 16,000 fans. It’s capacity this year is about 2,000.

But keeping the structure of the 16th hole intact was a priority for the tournament.

“We have a new logo, which is the shape of the 16th hole, and so we felt it was important,” Jenkins said.

“I don’t think you’ll see much difference in scores,” he said. “I think PGA Tour players have this weird way about them that the tougher and more chaotic an environment, the more they focus and they hit good shots. There’s been some amazing shots over the years there.

Even though it’s smaller, the 16th hole is the only sign of normalcy at this most abnormal of Phoenix Opens.

On-course concessions are mostly gone — there are a few concession stands, and tables and chairs spread out through the course. There isn’t a large merchandise tent. The entry has been dialed back to just a ticket-taking area instead of a gamut of vendors. Signs reminding fans to wear masks and eat or drink 10 feet behind the rope line litter the course.

But the self-proclaimed “People’s Open” won’t have many people, and the course will be quite open. The course looked vast, empty and wide-open Tuesday as it prepared to start letting fans in for the pro-am Wednesday. It looked more like the TPC Scottsdale that golfers can play in June than the one that welcomes nearly 750,000 fans every year.

The smaller crowds and lack of a raucous atmosphere helped convinced Rory McIlroy to play for the first time in his career.

“I think this year with less fans here it was certainly — I think certainly a more attractive option in terms of like introducing myself to the tournament,” McIlroy said.

After playing the TPC Scottsdale Stadium Course the way it is this year, McIlroy said he’ll have to come back to experience the course and the 16th hole, in particular, in all its glory.

But, for now, McIlroy, who hasn’t won in 15 months, is content playing in front of a few fans.

“[The fans] should make it a much better atmosphere than what we’ve been used to playing in over the last few months,” he said.

The tour has largely played on empty courses since it returned in June at the Charles Schwab Challenge, the relative emptiness will certainly be felt this week. Maybe even more so.

“This tournament, at the end of the week, we always feel like we just played a major because we’re so tired from — you have to zone out a lot of times throughout the round,” Simpson said. “You have to focus extra hard on getting ready for a shot because there’s just a lot of noise.

“So, I think I’m not going to play the course any differently, but I definitely think I’ll be able to conserve energy a lot more knowing that, a normal year, on the fourth or fifth hole, there might be somebody yelling in my backswing. I probably won’t have as much of that this year.”

Thomas said fewer fans on the course could affect his sight lines, especially off the tee. “I think you guys, spectators would be amazed how often we use something as a target, whether it’s some guy in the yellow behind the green or the edge of the grandstand or the ShotLink tower,” he said. “It seems like you’re always able to find something, whether it’s a tree or something that’s not normally there.

“I think that’s been the biggest difference is we’re able to use those grandstands or people as lines or kind of reference points. You obviously don’t have that as much currently.”

The process to get the tournament to this week began this summer, Jenkins said. It got to the point where he was having weekly calls with the PGA Tour and Scottsdale officials to discuss attendance figures. At one point, the number was set at 8,000 each day, but that number quickly dropped.

While COVID-19 cases have been declining in Arizona since Jan. 4, when they peaked at 11,969 confirmed cases for one day, the state is still third in the country with a rate of 67.2 cases per 100,000 over a seven-day span, according to the Centers for Disease Control.

Jenkins took the data into consideration when consulting with the tour and city officials, which took place when Arizona was experiencing its highest rates late last year.

“We just understand sort of where we are as a community with COVID and really it was just our decision amongst leadership that we would self-limit that attendance from 8,000 to 5,000,” Jenkins said. “But that was an internal decision and really not driven or demanded by anybody. We just felt it was the right thing to do.”

Will take a few more like this on 16!! 🔈🆙 @WMPhoenixOpen will be fun to finally have a few fans out there this week!! pic.twitter.com/VhqYP0Ls0a

Jenkins added: “The last thing any of us want is a perception that this is just the same old party atmosphere.”

In August, the tournament announced that it wouldn’t build the usual number of suites. Jenkins also knew that deciding anything in September, when construction throughout the course typically begins, or October would be premature because of the fluidity of the situation caused by the virus.

By September, Jenkins started to have a clearer picture of how many fans may be allowed in and construction started on the 16th hole in mid-November.

Through it all, Jenkins knew what was at stake.

He, along with other members of the Thunderbirds, the civic organization that puts on the Waste Management Phoenix Open, were at the Players in Ponte Vedra Beach, Florida, in March. He was at the Chainsmokers concert at TPC Sawgrass on March 10. The next day, he was on a flight back to Phoenix when the sports world shut down — except for golf. The Players allowed fans in for the first day of the tournament on March 12. Before the round was over, it was announced that no fans would be allowed starting the next day, but the tournament was canceled before the second round.

“It was surreal being at an event, a golf event, the day before and then the next day the world changed,” Jenkins said. “And really, once it got to the summer, we knew we were going to be dealing with it for the foreseeable future, and kind of a pity party stopped for me.

“The world is dealing with it. It’s terrible, but it was just time to sort of roll up our sleeves and make the most of whatever situation we’re going to be faced with.”

What are the odds?! Most unique shots of the 2021-22 season | PGA TOUR
Behind the Scenes – Titleist Golf Ball Plant Tour – Casing Layer to Cover
14 Club Challenge – ME AND MY GOLF vs Bermuda Golf Pro’s
Titleist Tips: Chipping from Different Lies
How To Get BACKSPIN With Your Wedges | ME AND MY GOLF